Appropriately for his role as Chair of the OFMdFM Committee at the Northern Ireland Assembly, Mike Nesbitt MLA welcomed those in the Long Gallery attending the Landscape Institute lecture on “Building a United Community: Design & Delivery of Shared Space”.

Mr Nesbitt told the audience, “Treat this building as your own; you should, it’s yours. And treat this subject as your own, because you are the experts.”

Indeed, this begged the question of the connection between urban planners and public policy making.

Paul Mullin explained how the regional branches of Landscape Institute are encouraged to pursue matters relevant to their locales. For example, his Northern Ireland branch made a formal submission to the Together: Building a United Community (T:BUC) policy consultation, and for which they’ve been invited to make a presentation to Mr Nesbitt’s committee later this week.

Today Mr Mullin described the difference between all that can be counted, versus what is worth counting. He displayed a slide of two juxtapositioned images, each with a rounding road, a row of houses and playing children. The first was with Cave Hill in the background; the other was a 20-foot interface at St Gall’s Avenue. His point was that the contents may be similar (number of houses, children), but contextually there’s a world of difference.

Slyvia Gordon (Chief Executive, Groundwork) described how her organisation managed to reinvigorate Alexandra Park, the only park in Europe with an interface barrier.

Opened in 1888, Alexandra Park was once a tree lined, open space where folk got together and networked, then became distorted with the Troubles. Changes in demography were abetted by competing communities living cheek-by-jowl. The open spaces of the park became venues for social unrest and violence. An interface barrier was established on 1st September 1994 (the day of the IRA cease-fire!).

Kate, from the Alexandra Park Steering Group, described how its members worked together. At first they were able to get the gate opened from 9am-3pm, i.e. when children were in schools. With positive results and encouragement from the local community, this progressed to have it opened from dawn to dusk.

Dr Milena Komarova, from the Institute for the Study of Conflict Transformation and Social Justice, at Queen’s University Belfast, began by explaining that the word ‘conflict’ may not be the best descriptor, because most urban spaces have to deal with various conflicts. It’s just that ethno-nationally divided cities can easily mask ‘ordinary conflict’, such as socio-economic disadvantage.

And one response is to pursue urban regeneration through economic-led initiatives. The Solidere project is Beruit — briefly described in Dr Komarova’s lecture today and more extensively discussed in the book, Divided Cities — is criticised for concealing (or even underlining) social divisions.

I immediately think of the £400m Victoria Square Mall project, also cited as part of Belfast’s regeneration. While it is undoubtedly a commercial success, how much has it improved the lives of Belfast residents?

Another local example of unaligned thinking were plans for Crumlin Road. Within the physical boundary of this project, the professionals applied their best thinking. But Dr Komarova argued that it was a missed opportunity, because of the lack of any linkage to any other existing or planned regeneration projects along its bordering spaces.

Mobility and connections among spaces matter. They give sense to form.

The Old Market Square in Nottingham was an example of how changing the physicality of a space can transform it. The hard edges and incongruent steps and barriers were replaced with slopes and water features.

The Amsterdam project was about figuring out how best to get people back into a former industrial site. His company’s role was to serve as a neutral actor, giving advice to the local communities.

But their Beirut project, Garden of Forgiveness, remains unrealised.

The challenge is to find ways to share a contained space between a symbolically significant church, mosque and synagogue, in the heart of the city. Mr Porter described his inspiration coming from those he spoke with during his walks along the Green Line — how these urban residents would escape for the weekend to the mountainside, the hills, the sea. He has incorporated these elements in his design for this space.

Yet just as contested cities can serve as microcosms and focal points of wider conflict, the Israel Defence Forces’ bombing of southern Lebanon, as well as the civil war in neighbouring Syria, have put this visionary project on hold.

This fact underlined a message in all three presenters’ experiences — building relationships matter in urban planning.

For Ms Gordon, she said that this means making T:BUC a priority in Northern Ireland, properly resourced to regenerate contested sites to community assets. 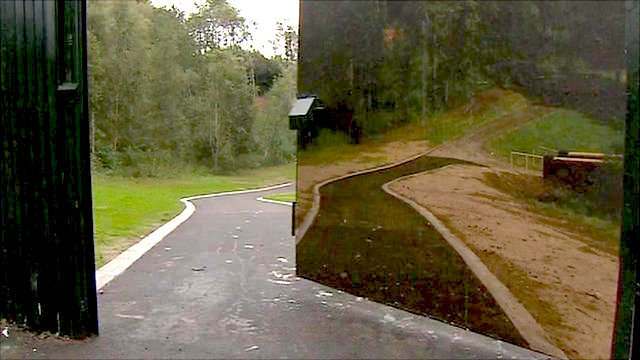 Bringing our own lens: Visualising conflict in Palestine

The value of poetry in political conflict: An Imagine Festival conversation with Michael Longley

The value of poetry in political conflict: An Imagine Festival conversation with Michael Longley by Alice HUTCHISON 22…
byAlice HUTCHISON
1 share
1
0
0

For Northern Ireland: Parity of esteem and reconciliation